A spooky grey sky hangs heavily over the summit of Weibao Shan, the air laden with the threat of a summer storm that refuses to burst. We catch a glimpse of a fluorescent green snake, slithering through the eye socket of a charred Taoist deity; victim of a lightning strike that had reduced his temple to a ghostly shell.

Down below, deep forests cover the slopes of the mountain and ancient Yi villages pepper the bottom of the valley.  The only other sign of life is a slightly dotty old caretaker and her dozens of cats.

Situated about 55 kilometers from Xiaguan (Dali City) in China’s Yunnan Province, Weibao Shan is a one of China’s most atmospheric Taoist Temple Mountains.

Arriving at an empty car-park in the middle of August was a slightly unsettling experience, for most Chinese sights tend to be over- run at this time of year. “What is wrong with this place?” I began to ask myself…  Basically, it is just too far off the tourist trail to attract Chinese tour groups, and so visitors are few and far between. In spite of my misgivings, as soon as we passed through the gates, we knew we had come to a rather special place.

When setting off, walk clockwise, to avoid a massive climb later on.  After a few minutes you come to the striking Wenchan Palace, where you are met by a life- size and very real looking fresco of a tiger.

Inside, the whole place is a classic Chinese scene from yesteryear, with an eaved pavilion built in the middle of a pond, joined by stone bridges and decorated with fantastic timeworn murals of the Yi nationality’s traditional life.

You’ll probably be invited for tea and a chat with the monks. 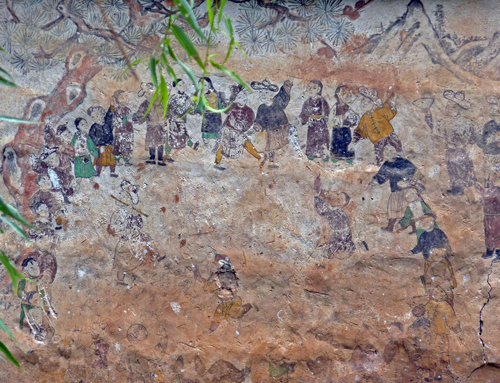 Moving on, you pass a number of smaller temples; each lovingly cared for by a lone Taoist lady and her cats.

The path climbs steadily through thick forest, some of the evergreens, cypresses and camphor, are quite rare.

Eventually, you’ll reach the summit, crowned by a ruined temple. A recent lightning strike has completely destroyed the outer walls, leaving two rows of blackened statues as the only reminder of what once was Weibao Shan’s main temple.

It’s a strange, eerie place, where the statues of the deities have been stripped of their colour and outer coating, and turned into crumbling skeletons of red mud flesh, clinging to wooden ribs and frames, somehow larger than life.

The path down is long and steep and you’ll thank your lucky stars that you didn’t try to do the trail anti-clock wise. Halfway down, we meet a panting young Chinese, desperate to know how much further it is to the summit. Not wanting to give bad news, I reply “not far”.

In due course the descent levels off, and you arrive at a large walled monastery where time has stood still.  This is the China you normally only see on the ancient scrolls in the Beijing Museum.

Inside the compound, two frail old ladies are tilling  a vegetable plot, set smack in the middle of the temple gardens, and many of the ancient halls still hold huge old cooking pots, farming implements, carts and other odds and ends that most of modern China has long since stopped using. The temple itself houses a beautiful, elaborately carved altar. 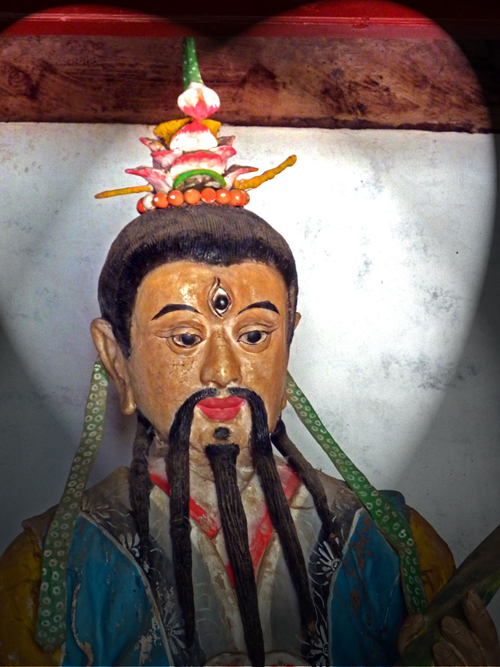 It’s a tough decision when you get to the detour for Changshan Cave: the path back to the exit is flat and smooth; the drop to the cave is steep, mossy and treacherous and will require a return trip. We decide to go for it and don’t have any regrets.

Built into the rocks, this enormous cave temple is just stunning (I know I shouldn’t use ‘stunning’, as according to a good travel writer’s guide, it is verboten, but I can’t think of a better adjective at the moment). Through a circular window in the façade, you can admire the beautiful altar and there are a lot more gorgeous carvings on the rafters and beams, as well as some very old paintings.

A friendly young Taoist monk, who is sitting in the courtyard playing cards with a group of locals, assures us that the walk back to the entrance will only take 20 minutes. He is surely fitter than us, but half an hour later we emerge back onto the car park.

Take a bus from Xiaguan’s (Dali City) west bus station for the 1 hour and 20 minute ride to Weishan. From Weishan you’ll need to hire a taxi.  We took the easy option and hired a taxi for the whole day from Xiaguan  (500 Yuan), which gave us time to see both Weibao Shan and the enchanting town of Weishan (see next article) in one day, and catch the night train back to Kunming. With your own wheels, you can also see something of the Yi villages along the way, and catch a glance of some local Yi people in their traditional costume.

However, if you do have the time, I’d recommend spending the night in charming Weishan.