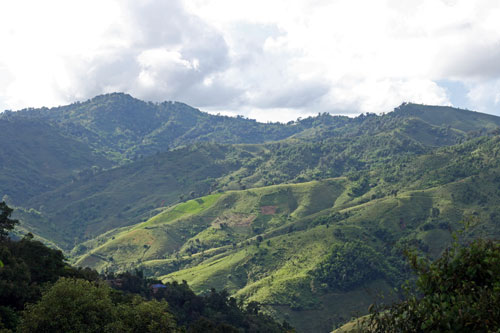 Mae Salong was home to the Kuomintang’s 93rd Army, which formed part of Chiang Kai Chek’s (Jiang Jieshi) Nationalist Army, for a number of years. When Chiang’s army was defeated by Mao Zedong’s People’s Liberation Army, the nationalists fled to Taiwan, but the 93rd Army found itself cut off in China’s Southern Yunnan Province. For a while, the stragglers carried on fighting the Communists, but eventually they were pushed across China’s borders and into Burma, Laos and Thailand. While many of the 93rd Army eventually made their way to Taiwan, a small number of diehards stayed on in the jungles, with the dream of one day returning to China to defeat Mao’s Communists. In order to finance themselves, the remnants of the 93rd Army indulged in opium and heroin production on a grand scale, with Mae Salong as their headquarters.

There is plenty to read up on

If you are interested in discovering more about the 93rd Army and its fight against Communism, what conditions were like in Mae Salong when it was part of the Golden Triangle, or how the surviving veterans feel about Thailand, China and Taiwan, this excellent article provides some great insights: http://www.oldworldwandering.com/2012/05/03/china-forgotten-army-mae-salong-thailand/.

According to a CIA report in 1971, Mae Salong was then one of the largest heroin refineries in Southeast Asia.[11] Only in the late 1980s, after Khun Sa’s army was finally routed and pushed over the border into Myanmar by the Thai military, was the Thai government able to make any headway in taming the region – part of which involved crop substitution plans and giving the area a new name. Santikhiri, meaning “hill of peace“, was introduced by the Thai government in an effort to disassociate the area from its former image as an established opium zone.[12] King Bhumibol Adulyadej and other members of the royal family made regular visits as a sign of their support for the old soldiers who had fought against their own country for Thailand (information taken from Wikipedia: http://en.wikipedia.org/wiki/Santikhiri)

Ultimately, the Thai Government weaned the 93rd Army away from the opium trade by bringing them into the fight against Thailand’s own Communist insurrection. When the fighting finished, the remnants of the army were given Thai citizenship and the Thai government set about taming the area. What better tool to quell fiery passions than the introduction of tourism and Oolong Tea?

While Mae Salong may not be a Thai Shangri-la, or little Switzerland, as some tourist propaganda would have it, it does have its own, somewhat tumble- down charm, set as it is in off-the-beaten track Northern Thailand.

The houses are built with red-brick roof tiles, and many doors are decorated with Chinese adornments and characters. There are teahouses and small family restaurants, some specializing in Yunnan delicacies. The Chinese community is an interesting mix of Chinese Muslims and Christians, with a Mosque and a Baptist Church almost next door to each other. And then, of course there are the colourful tribes, such as the Akha, or the Lisu.

Business in Mae Salong seems to be dominated by the Chinese – judging by the numerous Chinese commercial signs that appear everywhere – and by tea. And we are not just talking about any old tea; this is high quality Oolong Tea, one of the world’s most appreciated blends. Teashops abound, from large, traditional businesses, to informal, roadside stalls. You can pop into small workshops to watch tea being dried, or follow the workers, mostly colourful tribal women,  on their way out to the plantations. Once you’ve left town, you’ll find the surrounding countryside covered in terraced tea-plantations, or less frequent coffee plantations; their verdant tones only interrupted by the odd stupa crowning the summit of a mountain.

Other businesses that have sprung up alongside tea and coffee, are the cultivation of traditional Chinese herbs and medicines, as well as a somewhat timid tourist industry. Minibuses full of Thai tourists make brief stops here; allowing visitors just long enough to take a couple of snaps, buy a few souvenirs and, of course, some tea. A handfull of, mostly Western, tourists stay the night and go trekking in the area.

While the Chinese origins of most settlers lie in Yunnan, it is to Taiwan that the Chinese community here looks. Nearly all of those who have businesses related to tea and/or tourism, have family in Taiwan.

Apart from the anthropological slant, walking or trekking must rank as the main attractions of Mae Salong. Paths lead everywhere, and local guest houses can tailor treks to suit your needs. You can try anything, from gentle strolls through tea plantations (though nothing is that gentle here, due to the steep hills), to strenuous two- day hikes that take in different ethnic villages. Or, if that sounds too tiring, you could hire a pony for around 400B a day. It is quite easy to head off on your own too, and views are great wherever you go.

The morning produce market provides a good opportunity to see the local hill tribes in action, in a relaxed and non-touristy environment. The main ethnic groups you will see are Akha and Lisu. Though there are Mien, Lahu and Shan in the area as well.

The Akha head dresses are especially beautiful; many are still made of original silver coins, or round silver balls. 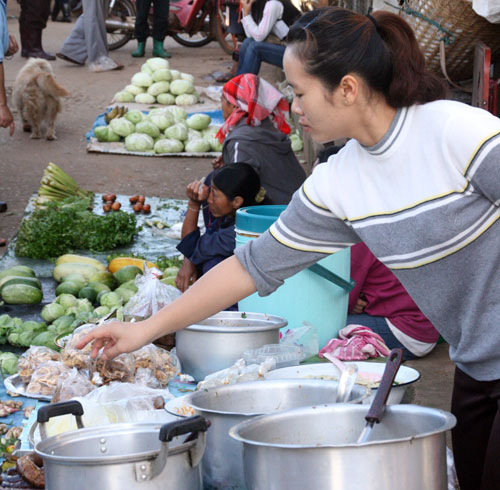 On the outskirts of town there is another, much more touristy market, where Akha ladies sell handicrafts to mainly Thai tourists. It’s of little interest to foreign tourists, though you can find tea there as well.

We stayed in the very pleasant Saeng A Roon Hotel, run by a friendly, old, Mandarin speaking lady who also had a tea plantation and an extended family living in Taiwan. A huge, clean room with views cost 300 Baht. We had some great conversations with the owner about what life was like before the sealed road reached town in the 1980s, when all travel was done on horse back.

There are several other budget options, such as the Shin Sane Guest House, the Akha Mae Salong Guest House and the Golden Dragon Inn; all strung out along the town’s one and only street.  For something more upmarket, you could try Mae Salong Villa (maesalongvilla@thaimail.com), or the Khumnaipoi resort, 1 km south of town.

We had a delicious Chinese meal in the Salema Restaurant. The Salema is a Muslim- run place, though their food is Chinese, rather than Muslim. Their pidan (thousand year old eggs) with red peppers were absolutely delicious!

We took a Mae Sai bound bus from Chang Rai (every 15 minutes between 6am and 4pm) and got off at the junction at Ban Basang (1 hour). There you have to wait for a Songthaew to take you up  to Mae Salong through some stunning scenery (1 hour, 60B per person). You may have to hire the whole Songthaew if there aren’t any other passengers; which is what happened to us. We had to pay 400 Baht.
Going back, a Songthaew (taken from outside the 7-Eleven) will drop you at the same junction, from where you can catch the bus on to  pleasant Chiang Saen. It is from Chiang Saen where we took the boat up the Mekong to Jinhong in China.

5 thoughts on “Mae Salong: a slice of Yunnan in Thailand”