The Ancient Town of Guo Yu

Just a ten minute stroll from the magnificent Minister Chen’s Castle, the peaceful, ancient, walled village of Guo Yu 郭峪古城 is that elusive old China you have been looking for, but of which you have only caught the odd glimpse.

Even these days, Guoyu is still dominated by its enormous and forbidding watchtower; so much so that nearly all the narrow flagstone alleys and secluded courtyards fall under its all-pervasive shadow. The fortified city walls and secret underground passage leading out from the watchtower point to a more turbulent past.

In more recent history, Guoyu also played an important part. It was used as a base for the 8th route army of the Chinese communists in the war against Japan and there is a memorial square to celebrate this fact.

Nowadays, however, all is peace and quiet. You can find plenty of Ming and Qing dynasty houses still occupied by local residents. Bow-legged elderly residents still hobble up and down the streets, carrying their shopping baskets or stopping to chat with a neighbor, while the youngsters seem to prefer quiet, electric mopeds.

The streets are adorned with red Chinese lanterns; clusters of corn on the cob hang from wooden rafters, drying; tiny vegetable patches occupy every available plot of land between buildings.

Don’t let the spruced up city gate and 30 yuan entry ticket put you off. Once inside the heart of the village, there is hardly a tourist in sight and the place is still completely free of the tacky trappings of tourist exploitation.

Signs point to the historical importance of some of the houses, but really the village made for just wandering and soaking up the old china atmosphere. As long as you make sure not to miss the impressive watchtower, or the lovely, quirky temple, which adds a touch of vibrant color to the town.

Near the entrance to the watchtower is a subterranean passageway that twists and turns for a few hundred meters underneath the village, before coming out near the city wall. It’s well-lit and very doable, even for a claustrophobe like me.

You can also climb on to the city walls for more excellent views back to the watchtower and over the courtyards.

From its gorgeous opera stage you can get good views over the temple complex. On the temple stage you can still see some fading slogans and paintings dating from the Cultural Revolution, when the building was taken over by the local government, urging the locals to put more effort into their work.

From there, we were drawn towards a hall near the entrance, bedecked with fantastically elaborate murals depicting celestial horses, 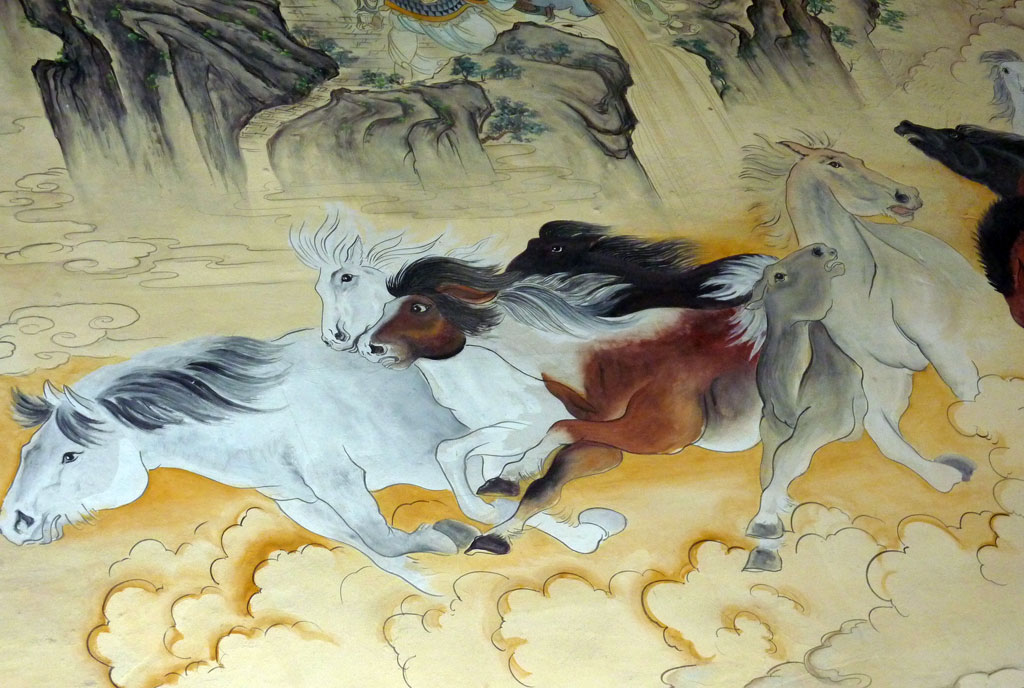 On our way out, we paid our respects to the frightening, life-size statue of a temple guardian, flanked by a ferocious mythical doglike creature, like a Chinese Hound of the Baskervilles.

Guoyun is a short 10 minute walk from the famous Minister Chen’s Castle.

To get to Prime Minister Chen’s Castle and Guoyu we hired a taxi for the day from Jincheng. The driver charged us 400 yuan, to take us there and on to various other sights. You can also get to the castle by taking a local bus from the east bus station in Jincheng.

Getting to Jincheng and away

We arrived in Jincheng from Pingyao. There didn’t seem to be any direct buses from Pingyao to Jincheng, so we took a bus to Changzhi,  where you can change to another bus for Jincheng. However, Changzhi is a huge city and the distance between bus stations is considerable. Try to get the Pingyao bus driver to let you off at the closet point to the bus station with buses for Jincheng.

It takes 4/5 hours from Pingyao to Changzhi (more if your bus crashes like ours did) and just under three hours from Changzhi to Jincheng; all by motorway.

When we left Jincheng, we took a bus to Luoyang which took about 3 hours. It’s a spectacular journey, as the motorway passes through a series of tunnels  providing tantalizing glimpses of majestic mountains as the road descends to plains around Luoyang.