Xiahe 夏河: November 1990 From our Diary

This is the final part of our travel report on Xiahe and the Labrang Monastery in China’s Gansu Province. The article is an unedited extract from the diary that Margie kept during our two year trip around Asia and the Middle East. The trip began in Lahore, Pakistan in early October 1990. By late November 1990 we had reached Xiahe.  Though we have now visited Xiahe 3 times (see previous articles), it was our first visit that really stood out, probably because  we hadn’t really experienced Tibetan culture before.

We have to get up early to catch the 7.30 bus to Xiahe; the only one of the day. The scenery gradually becomes more and more interesting. The whole morning we have been driving through a winter landscape of soft brown, reddish and yellowish shades. Every available scrap of land is being used: all the mountains have been terraced and divided into tiny vegetable plots, while the fields are used to grow potatoes, cereals and barley. There are haystacks everywhere and corns on the cob on every roof, drying. The villages, of a pinkish-brown hue, form an indistinguishable part of the landscape. 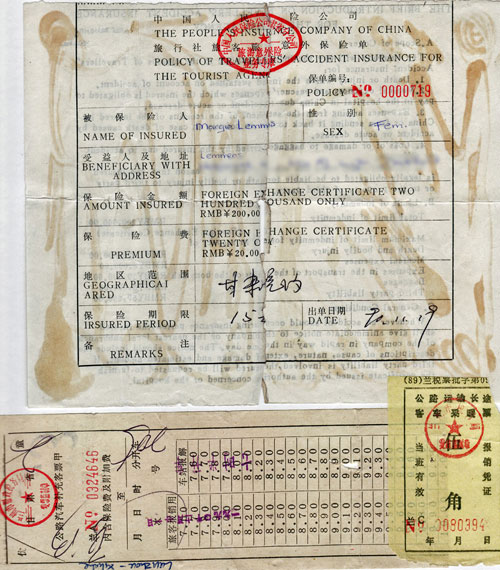 Looking out of the bus window, we can see many non-Chinese people, walking along the road. Most of them closely resemble Uyghur people, and they are wearing greatcoats, animal skins and furs, as well as heavy leather boots. The majority seem to be Muslims, judging by the white skull caps of the men and the black velvet and lace headscarves of the women. Many of the men also wear the large, round, horn-rimmed sunglasses that seem to be typical around here.

We stop for lunch just outside Linxia, a large Muslim market town, situated atop a reddish loess plateau. We can see lots of yaks milling about; as well as a whole pile of severed yak heads lying in a cart. Apart from yaks, there is a busy traffic of donkeys, pony’s and bicycles. Lunch, of course, consists of END_OF_DOCUMENT_TOKEN_TO_BE_REPLACED

The Xiahe we found on our last visit had changed considerably since 2004. It was no longer the rather innocent, peaceful, Tibetan little backwater we had enjoyed so much before.

The Chinese new town is much larger now, with charmless, concrete buildings, traffic lights and plenty of motorized vehicles. There was building work going on everywhere: in the new town, where more and more buildings were being put up at the usual breakneck speed; opposite the monastery, where a large coach park was beginning to take shape; and even in the monastery town itself, where END_OF_DOCUMENT_TOKEN_TO_BE_REPLACED