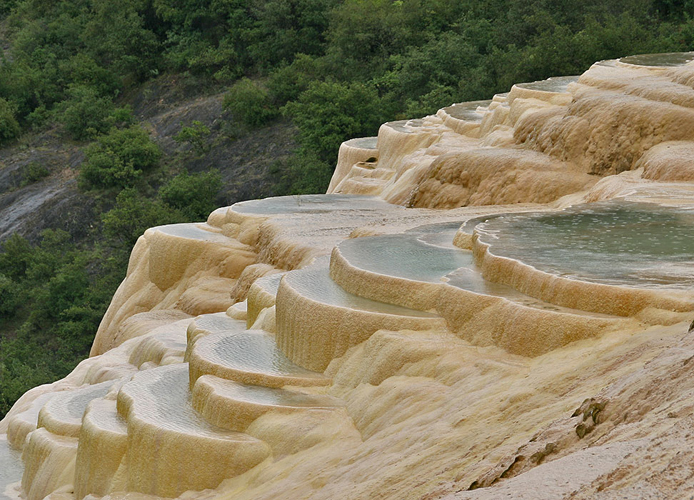 Here is how we wrote about it in our Diary that day (Sept 3 – 2007): … It is a stunning, largely uphill ride, through dense forests and undulating meadows crossed by rushing rivers. On our way we pass the occasional nomads’ tent and several small minority and Tibetan villages.
The first is a rickety, wooden Yi settlement that is virtually deserted. According to our driver, a taciturn Tibetan, the Yi are probably out gathering mushrooms. Curiously, the subject of the Yi is the very first to loosen his tongue: he claims that the Tibetans dislike the Yi because they practise slash and burn agriculture and are responsible for the cutting down of the forests…. Moreover, in general, they are not to be trusted (his words, not ours).  His outburst leaves us a bit baffled because, as far as we know, not all Tibetans are equally ecologically-minded. What to think e.g. of the extended use many Tibetans make of rare furs? 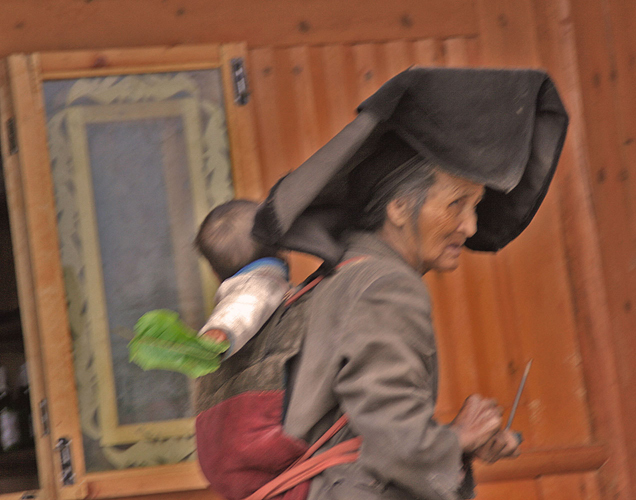 Fortunately, our driver is much more positive about the Hui village we pass later. The Hui people living there have adopted the Tibetan language and way of dressing, to the point where they have become almost indistinguishable from the Tibetan majority. Apparently, their ancestors fled to the area when the Muslim Kingdom of Dali was overthrown by the Qing troops, around 1850 or 60. 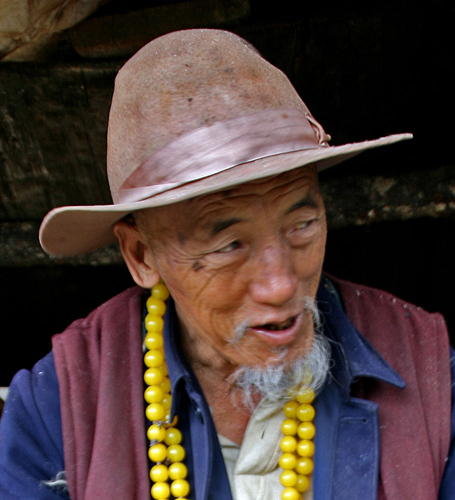 After three hours of leisurely driving, we get to Sanba, the village at the foot of the limestone terraces, where there is food and accommodation. Fortified by a tasty lunch, we buy a ticket and start climbing, along a well-built path, with whole stretches of timbered walkway and wooden staircases.
Just as we are approaching the first terraces, an old Tibetan guy with a cowboy hat and lots of beads appears from out of nowhere and beckons us onto the shiny surface which, we are surprised to find, isn’t  slippery at all!  He lures us to his small shrine, lights incense and ‘prays’ over us and, of course, expects a donation.. Never mind, we rather like the chap and the photos are great. 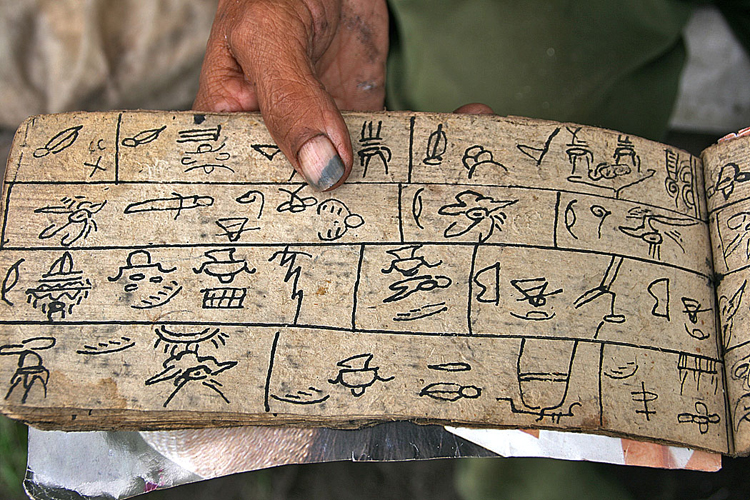 We walk up higher and come to a plateau, where the terraces end, though it looks as if the shallow, water-filled circles  that are forming here, may well develop into new terraces in the distant future. Up here, a profusion of wildflowers add colour and charm to the already photogenic terraces. Another old man, popping up unexpectedly, indicates that we should go a bit further, that there is more… There is, in fact, a beautiful crystal-clear pool where the water for the terraces originates. And in front of the pool there is another shrine, guarded by an ancient Dongba, or Naxi shaman, a shrivelled little man in robes with a pointy goatee and thick round glasses, holding a book of Naxi pictograms who, as you can guess, also wants to ‘pray’ for us and receive a donation. According to the Forbidden Kingdom (Peter Goullart’s book, mentioned in the Lijiang section), it is advisable to stay on the right side of these Dongbas, as they can be tricky when in a bad mood. So, we cheerfully undergo another mini ceremony, fork out the cash and take some good shots of the old guy.
After a short walk around the plateau, we return to the car and head back towards Zhongdian. We only manage to get our driver going one more time, on the subject of change in Zhongdian, Lijiang, Lhasa… and how he disapproves of it all! Close to town, we drive past a ‘Tibetan Cultural Tour Village’, or some such title, and ask him what kind of place it is. He just shrugs and says dryly, a rip-off joint. We do like this guy’s sense of humour!

We’ll be posting more about “Shanggelila” in the coming weeks as well as travel and cultural information on our Web Page  HolaChina: Your Gateway to China