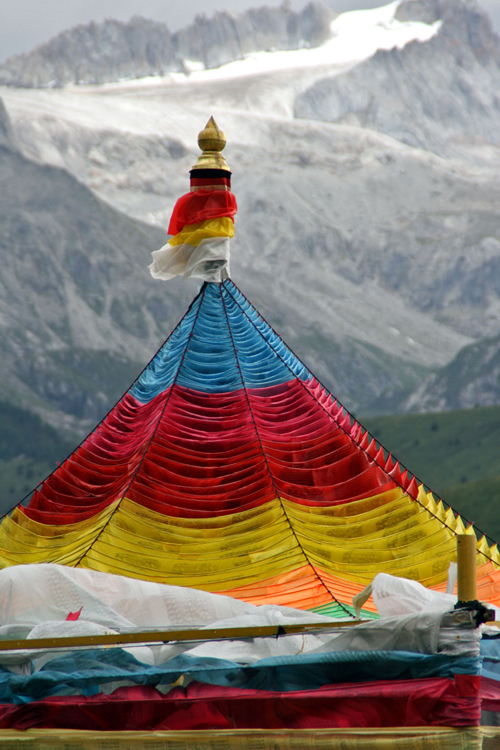 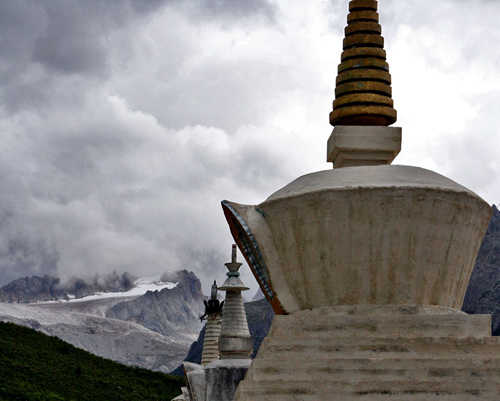 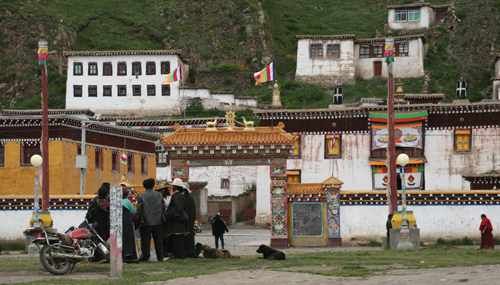 Soon after, there is a succession of passes and the landscape changes abruptly. Suddenly, we are back on the wild, inhospitable grasslands. The weather is even more changeable: one minute we driving through blazing sunshine; the next black clouds appear and a huge downpour engulfs us. Then it’s sun again, followed by snow and an incredible hail storm; all within an hour. 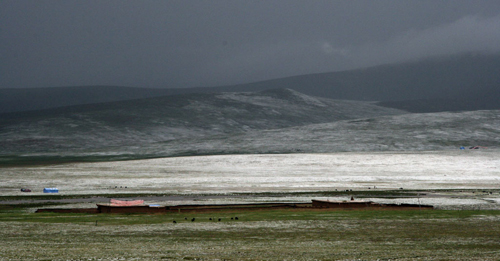 It’s early afternoon by now. As we cross yet another pass, a huge, snow- peaked mountain range comes into view: it’s absolutely amazing!

The road drops down to the valley floor and runs along, next to a winding, swift- flowing river, but the peaks never leave us. Every bend seems to afford an even better view. 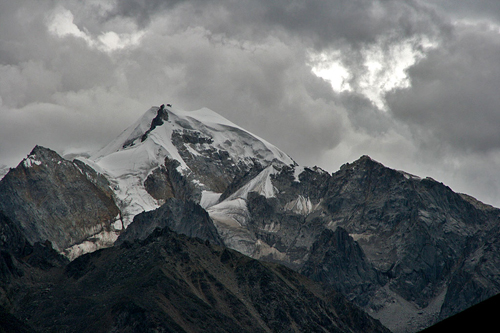 I’m worried that I may be annoying the driver, asking him constantly to stop, so that I can take yet another photo… I needn’t have worried though, because he’s busy taking photographs himself with his mobile phone. 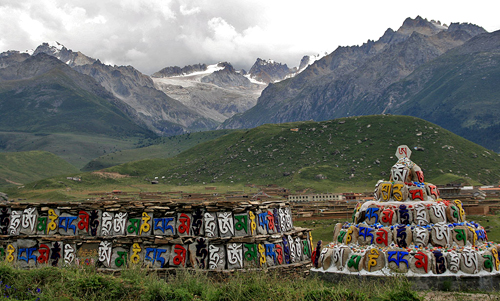 Meanwhile, we are looking out for the turn- off to the elusive Dzogchen Gompa; a monastery our driver has never heard of. After a number of near-misses, we finally spot it: how could we ever have missed it? There is a Mani wall, covered with brightly-coloured prayer flags, fluttering against a backdrop of mountains topped with whipped cream, below a traditional Tibetan town. 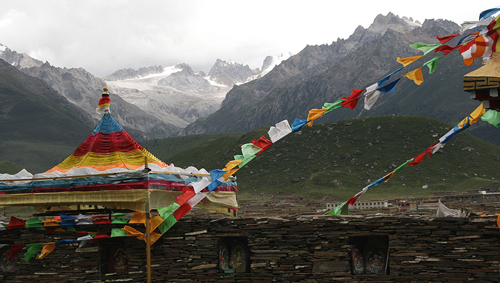 Everything is spectacular; my camera clicking finger is beginning to suffer from cramp. 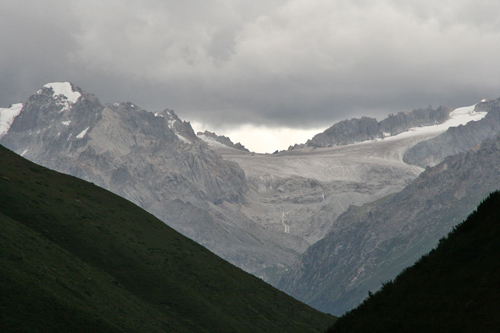 We drive through the town; it looks wild. Traditionally- dressed Tibetan men and women swagger along the streets, while grubby children play in the mud. Scores of little shops and workshops whizz past our car. 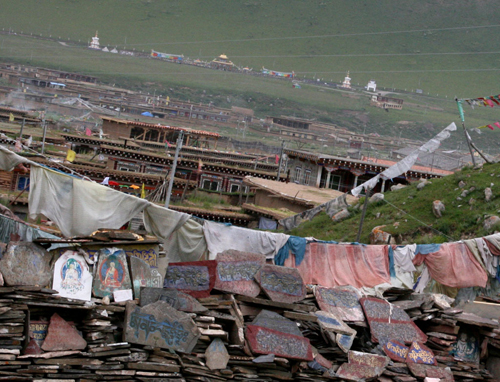 Then there is a slight climb and suddenly before us, there is a temple- strewn valley. Even more astounding are the prayer flags: I thought the Princess Wencheng temple had a lot of them, but the Dzogchen Gompa is in another league. 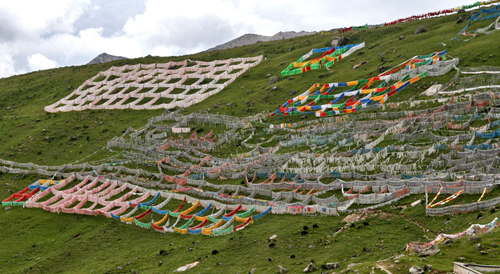 There are heaps of prayer flags up and down the hillsides, but more interestingly, many of them are positioned to form shapes and patterns on the slopes. Even our driver is impressed; he says that he would like to take his wife here as soon as he can. 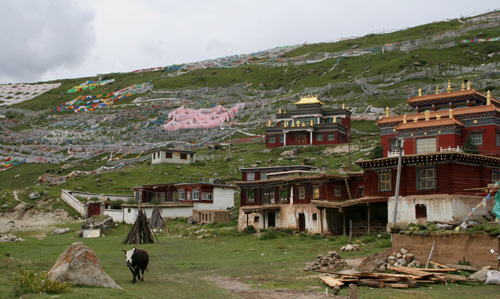 We explore a few monasteries. Though originally founded around 1675 by Dzogchen Pema Rigdzin, the monasteries are mostly new constructions, with more going up all the time. 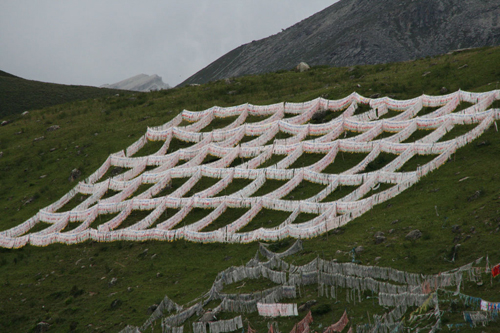 The whole monastery complex bore the hallmarks of having plenty of funding. It is said that the Dzogchen School of Buddism , part of the Nyingmapa tradition , is the most popular form of Tibetan Buddhism in the West and money certainly didn’t appear to be in short supply. 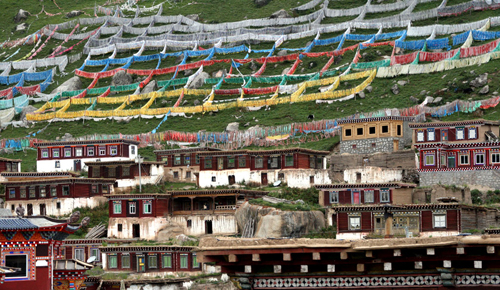 At least as far as monastery construction was concerned; basic sanitation facilities for the town were conspicuous by their absence. 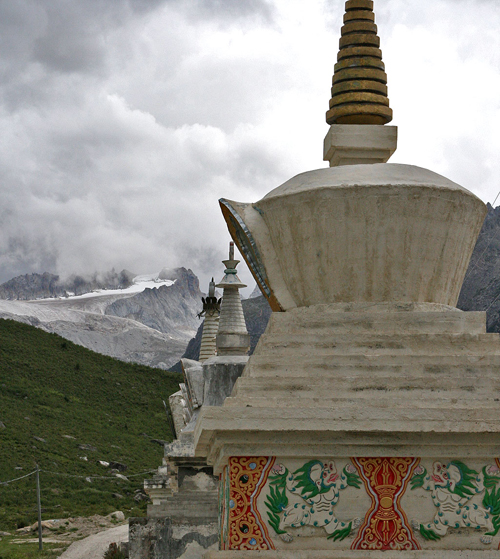 We venture up the valley; the glacier at the end of it almost comes right down to the temples. As the valley narrows, there are pine forests and above them cascading waterfalls. 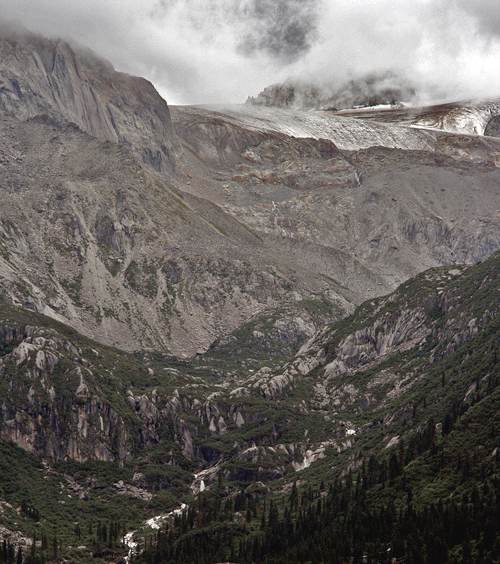 We notice that there is some kind of festival going on, with some pretty important visitors, because there are new and expensive looking 4x4s and other smart- looking vehicles parked all around. Scores of tents have been set up as well. 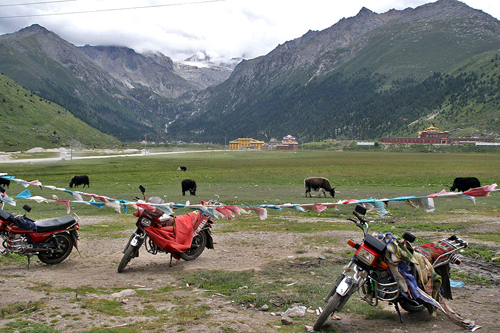 We go into the main monastery, again a pretty recent construction, and follow the pilgrims around. There are Tibetans, South-East Asians, and what seem to be overseas Chinese, though it is difficult to tell. As we join the pilgrims on a mini- Kora around the monastery, the weather turns ugly and it starts bucketing down. 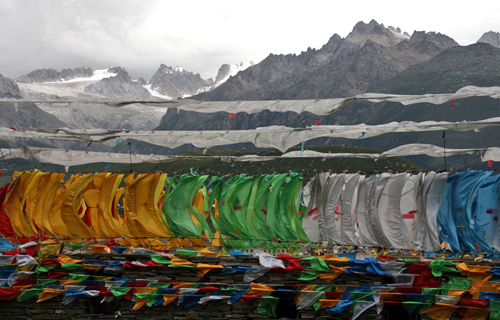 The pilgrims’ enthusiasm doesn’t dampen and they continue to tramp around the Kora. 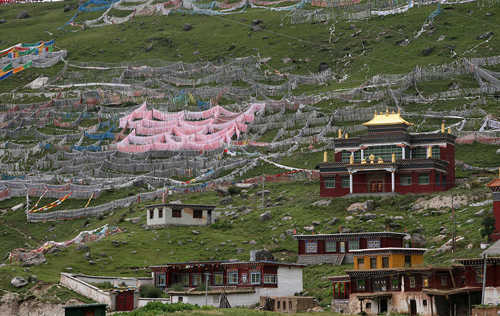 We, on the other hand, beat a hasty retreat: it is getting late and darkness descends quickly at these altitudes. Soon, a heavy mist engulfs the valley and the enormous towering mountains disappear; you’d never even know they were there. 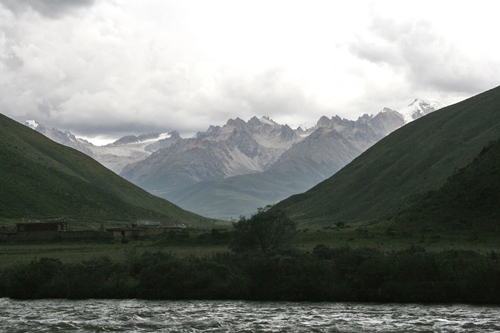 One final pass, the 4600 Muri La, and then we are rolling towards our destination. 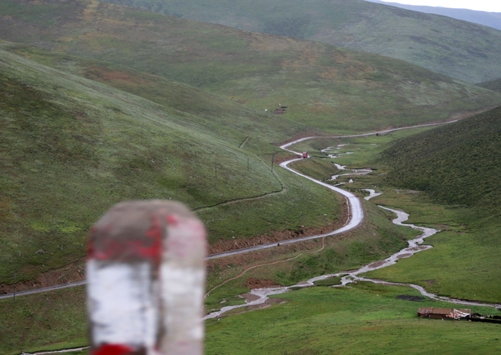 As the small Tibetan outpost of Manigango comes into view, I remember our first visit there, back in 2004, when we thought it might be the last town at the end of the world; so wild and rough it had appeared. Mangy dogs, retarded beggars and drunken nomads had seized upon us when the bus paused for a lunch-stop on the way to Dege.

Now, in the last light of the day, reaching Manigango is almost like reaching civilization. No beggars assault us now. We park outside the Manigango Pani Jiudian, get ourselves – and our driver- a room, order some beer and sit down to eat. Little did I know that I was about to have the worst attack of altitude sickness ever…

Travelling:
From Serxu Xian there are daily buses that run through Manigango on their way to Ganzi (Garze) and vice versa. You can also catch buses to Dege that come from Ganzi. (mid-morning)

We stayed in Manigango at the Manigango Pani Jiudian, which is where the buses stop. The new rooms cost 150 Yuan and are very clean for these parts of the world. The electricity seems to finish at around 21.00 and the promised hot water was not hot. There are plenty of cheaper rooms starting at around 40 Yuan.

The restaurant of the Manigango Pani Jiudian makes pretty decent food. There is quite a wide choice of vegetable dishes for these parts. You basically have to go into the kitchen and point and ask the price. The owners are friendly and speak good Mandarin, as well as a few words of English.