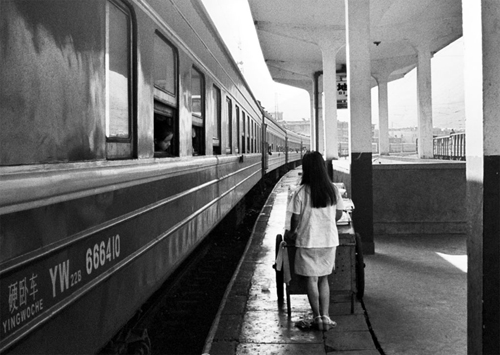 With a reservation in our hands, we took a more leisurely stroll to the train. Unfortunately, we found a family, consisting of two adults and 5 unruly children (not sure how that is possible in one-child China), occupying the 4 other berths above and below us. 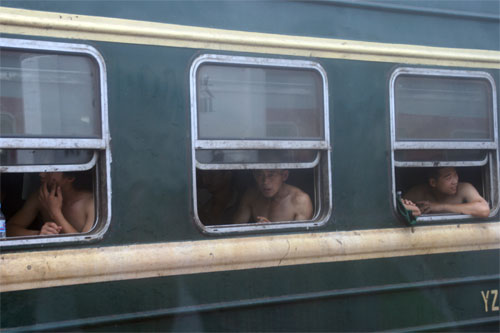 Chaos reigned! Within an hour the floor, table, and most of the corridor around us were a mosaic of  discarded sunflower seeds, gnawed chicken feet, and empty bits and pieces of instant noodles that had been dropped and strewn all over the place. Despite the best efforts of the carriage staff to sweep them up, our sleeping area never recovered during the entire ride; which would eventually be 56 hours…

Five children cooped up for two days on a crowded train can test the nerves of even the most ardent and patient child lover (neither of which is a trait found in mine or Margie’s character). We hid on our middle berths, trying to ignore the mayhem above and below; only coming down for a pee, or to find a space to eat or drink a beer. Meanwhile, the children ran amok, climbing and swinging off the bunk beds. Scoffing the contents of the numerous bags of food they had brought for the trip, the pip spitting parents, mostly ignored their off-spring for the duration of the journey.

However, it doesn’t take long to make friends on long distance trains in China. Other passengers came to talk to us, and instantly a strong solidarity built up as we all hunkered down for the long ride ahead. Food, drink and conversation were soon being shared between pauses for siestas, reading and gazing out of the windows. It’s what we love about train travel in China. You get set in a rhythm that is difficult to break. We were even on smiling terms with the little monsters (the 5 children) by the end.

As we approached Chengdu, everyone began to gather their stuff. I wasn’t actually sure I wanted to arrive; we had become so tuned in to the pace of life on the train.

As China modernizes its railway network, the slow trains are being fazed out. The modern Z and D trains whizz passengers around the country with speed and efficiency (except for the odd accident). But they are impersonal, and like on European trains, human contact and interaction is minimal and mostly avoided. I suppose it’s the end of an era.

For more info on train types in china click  below:

2 thoughts on “Slow train to Chengdu 成都的临客: Photo of the Week”