Due to a number of family matters we had to cancel our trip to China this summer. Instead, we’ve had to content ourselves with reading books about travelling in China. Country Driving; A Chinese Road trip, was one of the best. Hopefully we’ll be able to head to the Harbin Ice Festival this winter as compensation for missing out this summer. We still have loads of travel material to upload. 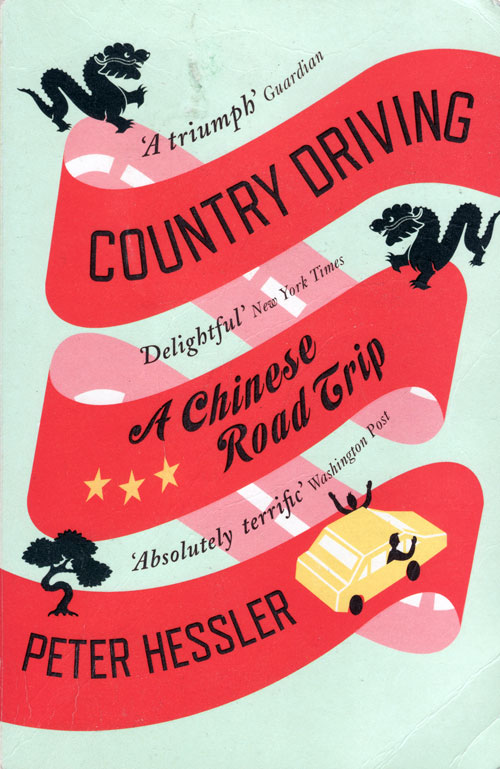 What’s it like to drive a car around China? As neither Margie nor I drive, we’ll probably never know. However, Peter Hessler’s fascinating, and often hilarious book, gives you a wonderful insight into what it might be like. Hessler’s observations on the quirkiness of driving in China, which include the amazing opportunity he had of taking part in the test driving of the Chinese Chery, are unlike anything you may have read before.

And yet, Country Driving is much more than just another travel book; Hessler’s fluency in Mandarin allows him to connect with the Chinese in a way few westerners are able to do. In fact, his encounters with the people he meets on the road, and the relationships he develops with them, are the real highlights of the book. I particularly enjoyed the incredibly relaxed and open relationship Hessler cultivates with some of the characters, such as the people from the car hire company, or the family in Sancha village.
Country Driving is divided into three parts.

This part focuses on his first trip into remote areas of the northern provinces of Shanxi and Inner Mongolia, where he traces the crumbling remains of the Great Wall. Along the way, he picks up hitch-hikers and passes through time- forgotten villages, whose names hark back to their glory days when they were at the fore-front of the defense of the Empire.

Names like Slaughter the Hu, or Smash the Hu (the Hu being the Barbarian tribes from the North) are not too dissimilar to the names of villages we still have here in Spain, like Matamoros (or, kill the Moors).

A second, extended trip takes Hessler as far as one of our favorite provinces, Gansu, and beyond the Buddhist Caves at Dunhuang.

In this part of the book, Hessler doesn’t actually do that much driving, though it’s the fact of having access to a car which allows him the luxury of a second home, not too far from the capital. Whilst exploring the ruins of the Great Wall near Beijing, he comes across a tiny village, Sancha, which has barely been touched by economic development or tourism. Hessler manages to rent a house in the village, and starts spending time there writing. During his stay, he witnesses the transformation of the village from a poor and backward, to a rural retreat for Beijing urbanites eager to rediscover the simple pleasures of country living. Moreover, he describes how these changes affect the residents of Sancha, many of whom he gets to know intimately during his frequent visits and prolonged stays in the village.

The final section takes Hessler to the province of Zhejiang, to the vicinity of the booming commercial city of Wenzhou, famous for its entrepreneurs. Hessler follows the setting up and development of a factory in a completely new town, Lishui, and observes the ever- changing relationships between the management of the factory and the workers, as the fortunes of the company fluctuate amid a series of ups and downs. It’s amazing how the author is able to gain both the trust of the owners and management of the company and that of the workers. Both sides confide their feelings and sentiments to him, which allows the reader to gain an in- depth understanding of the nature of working relations in China´s factories.

Country Driving: A Chinese Road Trip is an engaging book and a delightful read. If you’ve ever imagined driving through China in your own car, this book will no doubt inspire you to go out and do so. However, what makes this book so special is the author’s willingness to engage with the people he meets and, at times, go out of his way to help them.