It’s a tedious ride on a local bus from Taiyuan passing through an endless sprawl of residential tower blocks that blur the distinction between the ending of one town and the beginning of another. The apartments are interspersed with companies, ranging from small and medium-sized to large, all set back from the road in their own compounds. The traffic is relentless and the ride seems to go on and on.

Then, suddenly, you are dropped in Yuci榆次Ancient Town and immediately the urban horrors of modern China recede and give way to striking temples, imposing ancestor halls and magnificent but austere Confucian buildings. Add to this some exquisite vernacular buildings from the Ming and Qing dynasty and you can enjoy a superb day trip from Taiyuan.

On a beautiful winter’s day in early January with temperatures below 10 and an azure sky, we were incredulous to find the town devoid of tourists, finding ourselves more often than not the only visitors at the various sights.

Start by paying 60 Yuan for a Tong Piao 通票 (through ticket), which allows you to visit all the numerous sights; you can wander around the town itself without a ticket.  The first on your list, and close to the entrance, should be the magnificent God Temple 隍庙, where you’ll find ancient stone halls, delightful wooden eaved roofs and some wonderful and gory depictions of Buddhist Hell; the agonizing torture scenes appear painfully real.

Like many of Yuci’s 榆次 monuments, it is a large rambling place with hidden courtyards and secret halls. The main hall is absolutely exquisite: three-tiered with greenish roof tiles and intricately inter-locked wooden eaves. 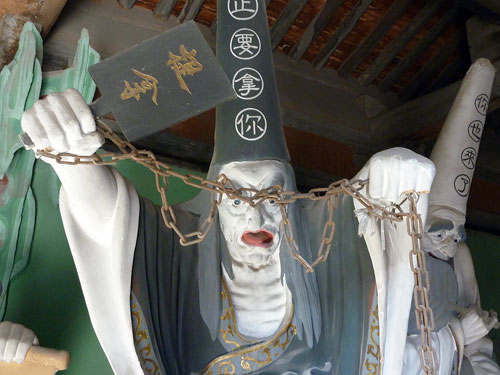 The roof- ridges are decorated with green and yellow glazed tiles, covered in flowers and dragons, with little pagodas on the corners. The middle of the main roof ridge even sports its own mini-temple!

There is so much to visit that even the most veteran Chinese traveller is amazed by how many grand buildings can stand in such a small and compact space. We had originally expected to spend only a couple of hours in Yuci 榆次, but with so many sights to see, we spent close to six with hardly time for a bite to eat.

Another notable structure nearby is the Compound of the Government Officials; a huge rambling place which includes a scary former prison area with metal-studded doors, dank cells and horrific black and white photos.

It’s not a place for the sensitive for, unlike the torture scenes in Buddhist Hell, this is the real McCoy. Some of the pictures, such as the execution of someone by death by a thousand cuts 凌迟, are a pretty gruesome reminder of what it was like to fall foul of the law in imperial China (Margie has told me not to put them on the blog).

The grand Confucian Hall, accessed through a handsome, towering wooden gate is next. The complex is fairly Spartan and mostly empty, but the gardens are lovely, full of (frozen) lakes, pavilions and romantic walkways. Pity those gardens are now surrounded by the ugly modern flats of Yuxi city…

Another noteworthy sight on the ticket is the city museum, housed in a handsome, two-storey mansion, set in a small, idyllic garden. The second floor is accessed via a narrow wooden gallery with suspiciously creaking rickety planks, secured by iron railings. 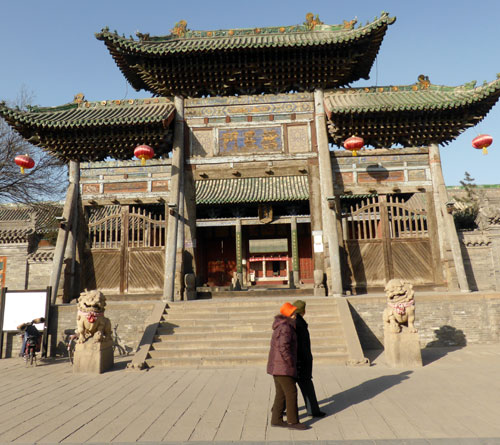 We take some time out and simply wander the old streets, lined with timeworn mansions; or the imitations of such … Yuci is home to a booming film industry and many buildings have signs and photos with explanations about which film or period series was shot there. Others have been rebuilt – or simply built from scratch – to meet the needs of the studios.

Adding to the dreamlike, unreal atmosphere is the fact that some of the old houses are now home to quirky photo studios where you can dress up as an Emperor, 1930s Shanghainese Belle, Revolutionary Red Guard, Russian Soldier or even US Marine, pose with a gun in your hand, atop an old tank, or however else grabs your fancy, and have your photo taken.

In the late evening, the locals come out and take control of the central square. One old man caught everybody’s attention. He must have been in his late eighties or early nineties. With the temperature hovering at around 10 degrees below zero, he stripped naked to the waist and proceeded to bend iron bars around his muscular torso and crush glass with his hands; a pretty impressive sight.

The local children nonchalantly ignored him, as if they had seen it all before, and turned their attention to a master candy maker, who was making amazing syrupy treats in the shape of dragons, butterflies and other insects.

If you have a spare day in Taiyuan, then Yuci makes for a pretty good day trip. There’s plenty to see and some of the sights are actually quite stunning. Just be prepared for a bit of a scrum to get your bum on a seat on the return journey (a bit like the China of old); get your elbows ready as the bus pulls in.

We took bus number 901 from opposite the Taiyuan train station. It’s a slow, torturous journey through some pretty ugly urban sprawl.

There are a few restaurants in the old town but we found ourselves visiting all the sights without even stopping for bite to eat, so I’m afraid there is nothing we can recommend on the food front.