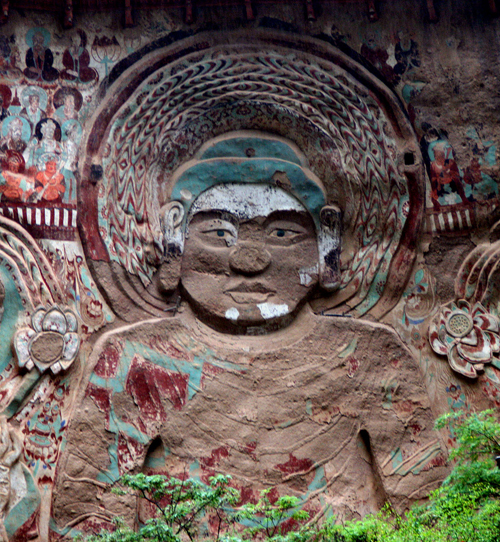 Another gem in Eastern Gansu, the Water Curtain Caves (Shuilian Dong) and Lashao Si 拉稍寺 take a bit of  an effort to reach, especially if you are using public transport, but reward the intrepid with a valley of Taoist temples, rock carvings and paintings, without another tourist in sight. Unfortunately, for the next year, the path up the valley is being rebuilt and building work is everywhere somewhat spoiling the valley’s isolation. The huge carved Buddha and paintings overlooking the valley are under going restoration, but at least the scaffolding is being withdrawn and they can be seen quite clearly. However, many of the frescos are still covered. I’d recommend postponing any visit for at least a year. Some of the path up the valley is a death trap. At one point we had to clamber and crawl around some dodgy and hastily erected scaffolding that was holding up a cliff face as rocks fell all around us. Also try not to go when it’s raining as we did. The dry river bed becomes a raging torrent. 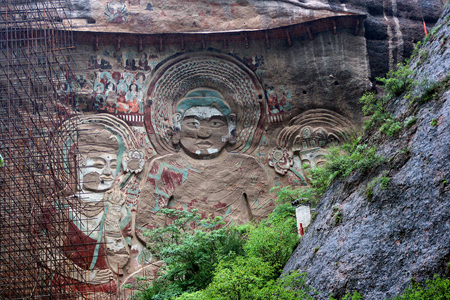 The images and frescoes were carved and painted during the Northern Wei dynasty (AD 386 – 534) and the colours are still fantastic. The object of the restoration work seems to be to try and build a shelf above the images in order to protect them from erosion and the elements. In order to get the best views of the paintings, climb up the path in the direction of the Taoist temple, Shuilian Dong. The surrounding scenery is spectacular with domed sandstone mountains rising up above the valley.

Getting There:
We hired a taxi from Gangu station for the day (200 Yuan) and took in the Sakyamuni Statue on Daxiang Shan near Gangu as well ( see the previous posting for getting to Gangu). There are frequent buses between Gangu and Luomen from where you can also get private transport to the Water Curtain Caves. There are also buses from Lanzhou and Tianshui direct to Luomen. 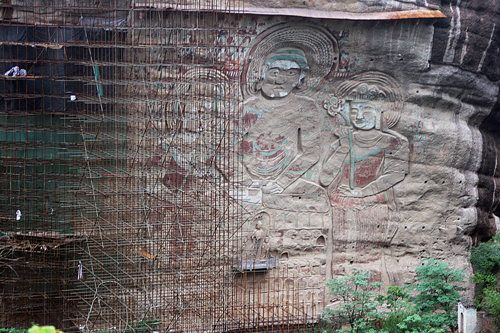 Whatever transport you take at the moment you’ll have to walk the final 3 kilometres to the carvings and temples. It would be a stunning walk if not for the building work. Eventually the new road will go right up to Lashao Si which will be a pity as the valley’s serenity will be lost. 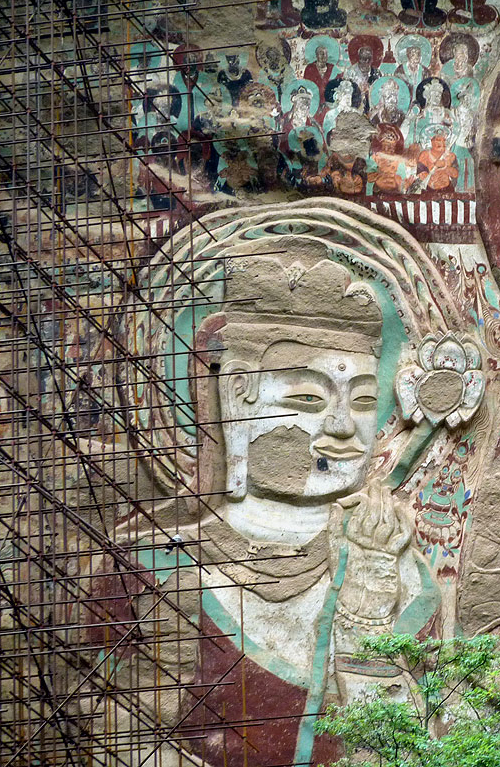