Beijing Time 北京时间 is the title of an exhibition that is currently being held at the Matadero (Paseo de la Chopera 14), a centre dedicated to contemporary creative arts in Madrid. The exhibition has been organised by Casa Asia.

The title refers to the fact that the whole of the vast territory that makes up China, is run according to whatever time it is in the capital; regardless of the inconvenience this causes in the far-flung border regions. For instance, when it’s 9am in Beijing, it’s only 6 am in Xinjiang. Depending on the political stance you take, Beijing Time can be seen as a symbol of unity, or the government’s attempt to impose this unity.

A second reading of the exhibition’s title refers to the increasingly prominent position of Beijing/China on the world stage, whether in a

Though the individual works are very different; they include photographs, paintings, sculptures and a wide variety of installations, they do focus on a common theme, which is the City.  This City is a symbol of the rapid transformations China has undergone in the last 20 years, such as massive industrialisation and urbanisation, vast migratory movements from the countryside to the cities, or the enthusiastic adoption by city dwellers of many ‘western’ icons of modernization.

As a result, and in spite of the authorities’ best efforts, urbanization in China is a far from orderly process, which has given rise to a new, uniquely Chinese, diversity.

Among the highlights, I would like to point out:

YIN Xiuzhen’s Commune, a tent-like structure of used clothing sewn into strips, which conceals a sweatshop complete with sewing machines and heaps of piled-up clothing.

JIN Shi’s amazingly detailed miniature versions of a tiny, one-room hutong dwelling and a small, neighbourhood shop. Apart from their dimensions, there is nothing that differentiates these models from their real-life counterparts in old Beijing. Besides, the reproductions clearly show the contradiction between the quaintness and character of those old houses, and the undeniably uncomfortable living conditions they offer; though they cannot hope to reproduce the communities such houses once belonged to.

I was particularly struck by YUAN Shun’s model of a desert-like landscape, dominated by rectangular and circular shapes. Somehow, without knowing exactly why, it made me think of the Chinese occupation/liberalization of Tibet. I was therefore quite intrigued to read in an interview that Yuan Shun studied at the art army university and that his work was influenced, among other things, by the shape of the Mandala and by Sun Tzu’s treatise on The Art of War.

If you are walking around the centre of Madrid, you can find some more exhibits at two of the Room Mates Hotels, as the hotel chain is one of the sponsors of the event.

At Room Mate Alicia, C/ Prado 2, there is another lovely installation by Jin Shi: a moveable karaoke, complete with disco lights, pictures of pin-up girls and all, mounted on a rusty old bicycle. Room Mate Oscar, Pza. Vazquez De Mella 12, has another installation on display. 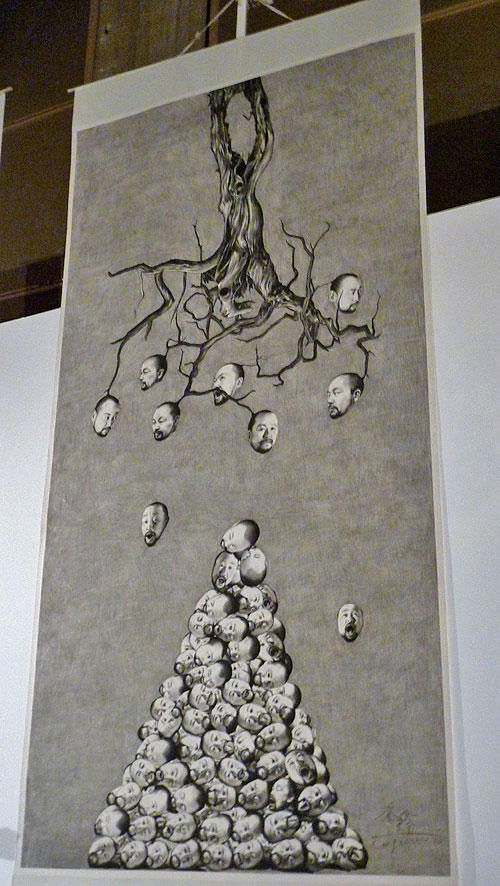 Here is an overview of the films we have managed to see so far:
Yellow Earth (1984, directed by Chen Kaige)
The Road (2002, directed by Zhang Jiarui)
The Orphan of Anyang (2001, directed by Wang Chao)
Judge Feng’s Last Trip (2006, directed by Jie Liu)

One thought on “Beijing Time 北京时间”