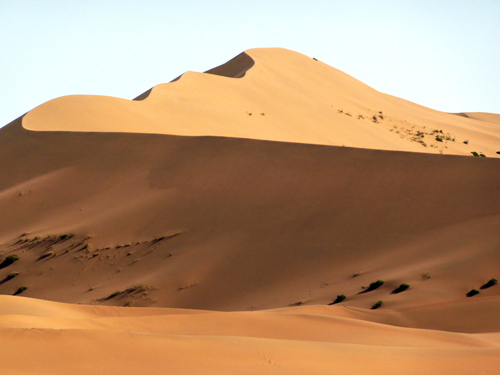 Getting to the magnificent Badain Jaran Desert, home to the world’s highest sand dunes, is far more straightforward than it appears on the map and in the guide books and can be done independently, with a bit of effort and determination. The desert can be approached from two directions: either from Ningxia’s capital Yinchuan via the Inner Mongolian town of Bayan Khot (also known as Alashan Zuoqi  阿拉善左旗), or from the Gansu town of Zhangye. 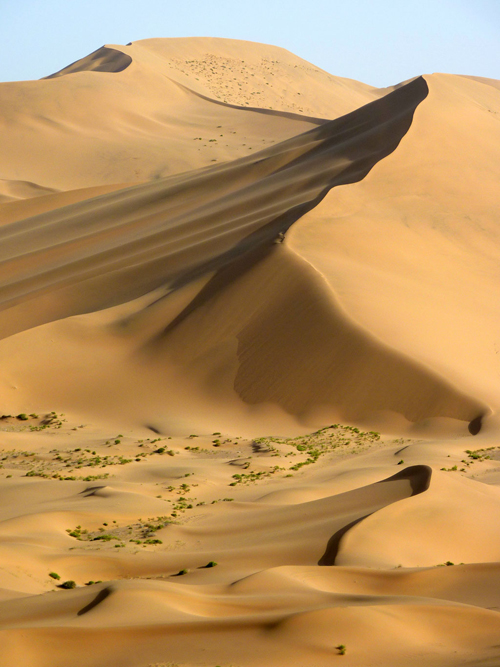 The base for visiting the desert is Alashan Youqi (阿拉善右旗), which is connected by a daily bus from Bayan Khot, or by two daily buses from Zhangye.
Below is the basic information you need to do the trip. In a few weeks we will be putting up a longer article about our experience there, illustrated with more photos.

Getting there from Yinchuan

There are regular buses from Yinchuan’s main bus station to Bayan Khot, which should take around 2 hours. However, we decided to hire a taxi (400 Yuan) because that allowed us to stop at the ruins of the Great Wall at Sanguankou (三关口) and to make a side-trip to the Mongolian monastery complex of Guanzongsi (广宗寺). If you left really early, with a hired car you could also include a visit to Moon Lake, a desert playground for wealthy Chinese.

Bayan Khot has many hotels, but a fair few of them are somewhat run-down and/or don’t take foreigners, so it is worth looking for the wonderful,  Nei  Meng Gu A La Shan Meng  Bingguan (内蒙古阿拉善盟宾馆 ), where super-comfortable doubles go for a discounted 260 Yuan with breakfast ( which you’ll unfortunately miss if you have to catch the daily bus to Alashan Youqi 阿拉善右旗).

The locally recommended and very friendly Bayan Khot Huoguo (Caoyuan muge 草原牧歌) restaurant has the best Huoguo (hotpot) in town. Any taxi will take you there for 4 yuan. Unlike the typical Sichuan hotpot, here the broth comes in individual pots rather than one large pot for everyone. You can choose from many different kinds of broth, such as mushroom or lamb, or even goats’ cheese, which even the staff was reluctant to recommend.   See a future article on Bayan Khot for what to do and see around town.

Moving on to Alashan Youqi阿拉善右旗

The one bus a day leaves from the impressive new bus station, which is more like an airport terminal, at 7.10. Buy your ticket the day before, the bus is always full. The ride is a hot, 7 hour trip across the barren wastelands of the Gobi desert with herds of wild Bactrian camels providing the only signs of life and visual entertainment.

We stayed at the comfortable Yangguang Hotel (阿右旗阳光宾馆 ) for 260 Yuan a night. There were other options, including an even plusher hotel with a name vaguely similar to the Holiday Inn and various cheaper dives. Some of the cheaper places didn’t  take foreigners.

Locals recommended a couple of restaurants just up the road from the Yangguang Hotel that specialized in lamb and camel tripe. They were obviously a popular choice as getting a table was far from easy. However, our best meal came from the restaurant attached to the Yangguang Binguan. Superb and excellently presented dishes came with cold beer. Try the aubergine hot plate 铁板茄子, fried lamb in cumin, and the delicious onion pancakes.

Getting to the Badain Jaran Desert From Alashan Youqi

Even If you travel independently to Alashan Youqi, you’ll find that you can only visit the Badain Jaran Desert by taking a jeep; and all jeeps are organized through the Zhufeng travel agency ( 珠峰旅行社) that seems to have the monopoly on trips into the desert. Don’t worry about finding them; they’ll find you, within minutes of your arrival!

Vehicles cost one thousand Yuan a day for a two day trip. This is the price for a jeep and driver only. If you want to do the same trip all in one day the price is the same, i.e. two thousand Yuan, no negotiating. It is the same route; you’ll just be driving for around 10 hours. You can basically spend as many days as you want in the desert as long as you pay the 1000 Yuan a day for the jeep and driver.  The jeep will collect you from, and deliver you to your hotel.

Officially foreigners need to get police permits to visit this area. The permits cost 200 Yuan per person and the Zhufeng travel agency takes care of arranging them. However, we visited on the holiday of the Spring- Autumn festival and the Police office in charge of the permits was closed. At the police check-point just outside town, our driver managed to persuade the police to let us go in anyway, as we had only one day. At the ticket entrance to the Badain Jaran Desert we were asked to show our passports and our driver did a bit more sweet talking, which seemed to be enough (we were  quite happy with this hefty saving). The cost of the entrance ticket was 80 Yuan.

There are various routes you can choose from. We did a route that included various salt and fresh water lakes such as Mystic Spring (Shenquan神泉 / Yinde rituhu 音德日图胡), and the fantastically scenic area around an isolated Mongolian temple (shamo gugong/badanjilinmiao 沙漠故宫 / 巴丹吉林庙). It also gave us the opportunity to view Shamo Zhufeng 沙漠珠峰 the highest sand dune in the world at 400 meters.

Incredibly, there are some basic, but extremely clean places to eat and sleep in the remotest parts of the desert. Near the monastery, there are beds that cost between 50 to 80 yuan in five- bed dorms, depending on demand. The entrepreneurial Mongolian lady who runs the place and seems to be sole inhabitant of these parts is open to negotiating everything from the price of a bowl of noodles to the miraculously cold beer (believe it or not, she has a fridge). Her dining room also doubles up as a Communist Party meeting hall for the government and administration of the local shepherd community.

Plusher hotels are being built at the entrance and at Badan lake, just a few kilometers into the protected area. They are expected to be open next year.

Take plenty of sun cream, a hat and lots of water. The sun here is merciless and there’s no shade anywhere. Don’t eat too much before or during the trip; you’ll probably throw it all up as the jeep rocks and rolls over the dunes.

This excursion is not for the faint-hearted. While all the jeeps have reinforced frames to protect passengers and while drivers are experts, the feeling that your vehicle is going to overturn and roll down hundreds of metres, down a near-vertical slope, is ever-present. Our driver told us many do turn over, though he also assured us he never had. Imagine Paris – Dakar, but with the highest dunes in the world.

Will you be away from the hordes?

This, I suppose, will be the big question in the future. For the time being, you should be all right. We only came across one other jeep during the whole day.  The complete and utter silence of the Badain Jaran Desert and the sensation of being alone in such a wild and untamed landscape is one of its big draw cards. However, at the entrance, where a huge, yurt-shaped hotel was being built,  there were about 20 to 30 idle jeeps belonging to the travel agency.  It is difficult to imagine them all setting off at the same time, but Chinese domestic tourism demands such mass excursions and one fears the worst. 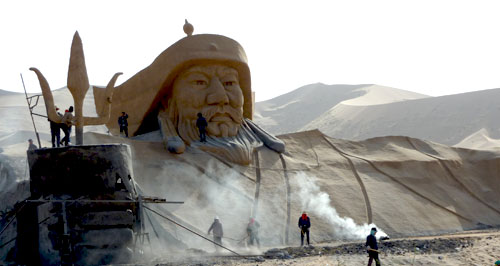 Make no mistake, the unexplored wilderness of Inner Mongolia is going to be the hottest travel destination in China for well-heeled Chinese adventure tourists (and there are lots of them). We saw several references to projected number of tourists expected to visit Inner Mongolia in the coming years on television, and those numbers were staggering.

The local Inner Mongolian authorities are reacting quickly and rapidly expanding the infrastructure to capture and entertain the expected hordes. Fortunately, the area’s saving grace probably lies in the sheer size of the desert and its ability to absorb and disperse even the largest numbers of Chinese domestic tourists.

The World’s Highest Sand Dunes: One other great plus:

Unlike around Hohhot, this is an area with a high percentage of ethnic Mongolians and you’ll have a great chance to meet and talk to them, if you can speak some Chinese.  If you’ve recently been to Ulaan Bator, they’ll love to hear stories about what‘s going on there.

There is a daily morning bus for the 7 hour return trip to Bayan Khot (Alashan Zuoqi  阿拉善左旗).
If you are moving on to Gansu, there are two daily connections for the 3 hour trip to Zhangye in Gansu province at 8.30 and 15.00, as well as a 10.00 bus to Shangdian Shan from where there is plenty of onward travel to Zhangye or Lanzhou.

Getting there from Zhangye

In the other direction, there was an afternoon bus from Zhangye to Alashan Youqi  阿拉善右旗) at 15.50. There also has to be a morning bus that should leave Zhangye at around 8.30 as we passed it on the way, at around the half mark of the journey.
Zhangye Accomodation
In Zhangye we stayed in the centrally located Ganzhou Binguan Ganzhou Hotel (Nan Da Jie 南大街) with large clean rooms, breakfast and broadband internet connection for 168 Yuan. 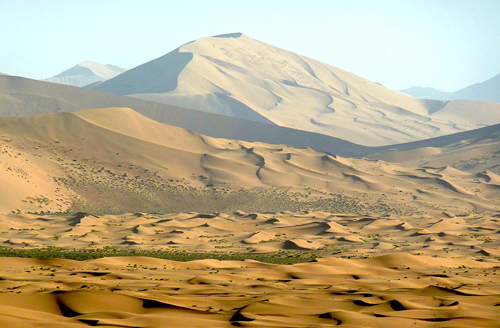 Try the area around the Ganzhou Market ( Jinmai Pedestrian Street Ganzhou Special Flavor Meishi Square‎ ).  Buying a beer for 5 Yuan gives you the right to sit at a table in the open square. Then go and choose your food from the many restaurants selling everything from dumplings , lamb hamburgers 肉饼,  fried rice and hand pulled noodles 拉面.
For a sit -down meal, try any of the restaurants on the restored Qing style Mingqing jie 明清街.  There’s an incredible variety and the place is heaving at night.