Just a quick visit this time, to keep withdrawal symptoms at bay. We entered China from Thailand by boat, floating along the Mekong River between Myanmar and Laos. Basing ourselves in Jinghong, we set out to explore the area of Xishuangbanna in more depth than we had done in 1991. Unfortunately, some of our plans to venture further along the Burmese border were dashed by torrential rains and collapsing roads. We left China via Menglun and Mengla and entered Laos, for a five-week, North-to-South crossing of that charming country.

Starting from Nanchang and the white lovely villages of nearby Wuyuan we embarked on a cross- China route to Tibet. On the way, we took in the Holy mountain of Heng Shan in Hunan, the fascinating Longhorn Miao people and the impressive Maling Gorge in Guizhou, as well as the Tibetan villages of Zhongdian and Deqin in Yunnan, in the area known as Shangri-La. We then spent three amazing weeks in Tibet, visiting innumerable monasteries in and around Lhasa, such as Sera, Samye or Ganden, before taking the famous new, high-altitude train back to Beijing. Still not tired, we made a final excursion to the town of Zhending, renowned for its temples and pagodas, and the magnificent Cangyan Shan, both in nearby Hebei province.

This time, the minority-rich Southern part of Yunnan – from where we made a side-trip into Vietnam and Cambodia – was our main objective. Heading South from Chengdu, we first made a couple of detours, visiting the architectural gem Langzhong and re-acquainting ourselves with the Cave Art at Dazu. In Yunnan we stopped at the lovely Dai village of Xizhou, on the shore of lake Erhai, and the historical towns of Tonghai and Jianshui, before reaching the Hani rice terraces around Yuanyang and the kaleidoscopically colourful market of Laomeng. On the way back from Vietnam, we spent several days taking in the sights around Nanning, such as the Detian waterfall, the Zhuang Rock Paintings at Huangshan, and the Ming village of Yangmei, before catching a night train back to Beijing.

Traditional architecture, interspersed with ethnic markets and sub-tropical scenery, formed the leitmotif of this trip. We travelled from the old town of Zhenyuan and the bustling Miao market of Chong’an in Guizhou, to the ancient Sichuan towns of Zigong, Huanglongxi and Luocheng, stopping off at the lush Bamboo Sea near Yibin and the waterfalls of Chishui. Eventually we reached the historical cities of Quanzhou and Xiamen in Fujian, and marvelled at the incredible Hakka earth-buildings around Yongding that were the icing on the architectural cake. We finished our tour by exploring the Grand Canal towns around Suzhou, such as Tongli, Lizhi and Wuzhen.

We submerged ourselves in the Tibetan parts of China, starting from Kanding, the gateway to Tibetan Sichuan. From there on, colourfully dressed Khampas and monks in wine-coloured robes dominate in a forbidding landscape of soaring mountains and vast grasslands. Ancient monasteries and their treasure trove of fresco’s, statues and paintings, add a touch of colour and interest to the scenery. Highlights included the wonderful printing monastery at Dege and the old towns of Ganzi and Litang. We concluded the route by heading into Gansu, through the monastic towns of Langmusi, Xiahe and Tongren. Finally, a train from Xining, the capital of Qinghai, took us back to Beijing. 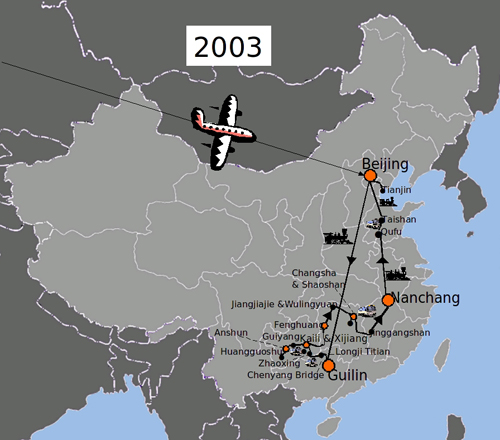 First and foremost, this trip introduced us to the ethnically diverse province of Guizhou. Stunning Dong architecture, colourful Miao costumes and Anshun’s bustling Sunday market were among the highlights. Lush valleys and Karst scenery accompanied us all the way, culminating in the spectacular Huangguoshu Falls. Subsequently, the historical town of Fenghuang and the eerie scenery of Wulingyuan awarded us our first glimpse of Hunan. There, we also visited important landmarks of China’s more recent communist history, such as Mao’s birthplace Shaoshan, or the mountain retreat of Jinggang Shan in Jiangxi, cradle of the Red Army. In another about-face, proof of China’s diversity, we finished our trip at the ancient, classical city of Qufu, birthplace of Confucius. 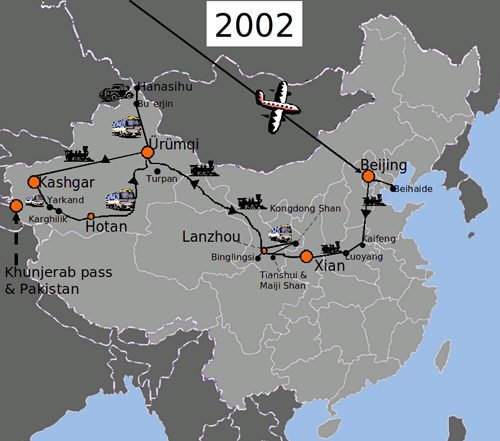 This trip focused on Islamic China. From Luoyang onward, our journey was marked by contacts with China’s Muslim communities; the smell of roasted meats and the call to prayer would be ever present. A variety of ethnic groups, such as the Uighurs of Xinjiang, the Kazaks, Mongolians and Kyrgyz who live on the fringes of China’s Western borders, or the spread-out Hui people, all added colour to this memorable trip. The occasional Buddhist sights, such as the Longmen caves, Kongdong Shan, Maiji Shan or Bingling Si, showed that other religions once had a foothold in this region. 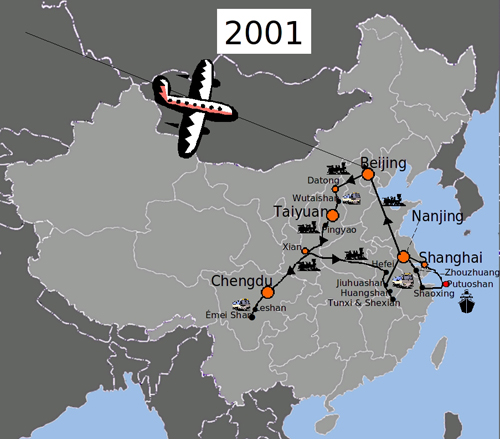 We flew into Beijing after a 10-year absence, to find the country almost unrecognisably changed. Our route of rediscovery took us into the heart of Han China and its Buddhist and Taoist heritage. We admired the amazing cave art of the Yungang Grottoes near Datong; scaled several of China’s most famous Holy and scenic mountains, such as Emei Shan or Huang Shan; then recovered from the effort at hidden retreats such as Jiuhua Shan and Putuoshan Island. 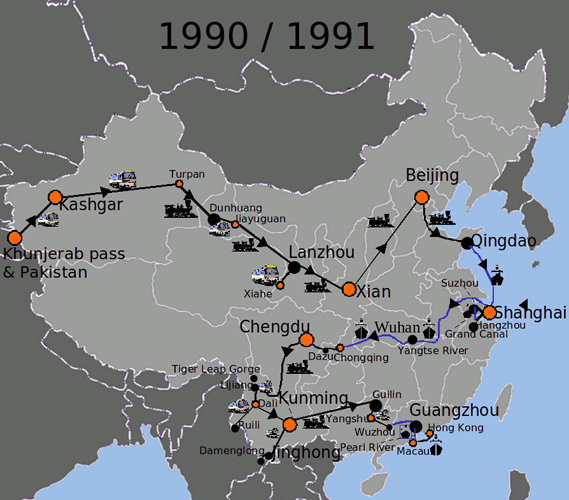 On our first China trip, when foreign visitors could be counted on the fingers of one hand, we entered China from Pakistan on a rickety old bus that followed the Karakoram Highway and crossed the Khunjerab Pass. The Kashgar Sunday Market was our first, unforgettably exotic, ‘Chinese’ experience. We then loosely retraced the Silk Route all the way to Beijing. Next, we swung back towards Central and Western China, using local boats, buses and trains. Highlights such as Lijiang, Dali and Ruili were totally unspoilt and utterly fascinating. After nearly 6 months we left China via the Pearl River on a night boat from Guangzhou to Macau.