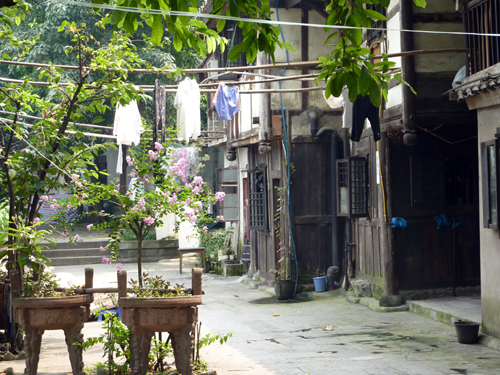 One of the easiest places you can get to from Chongqing is Ciqikou, a traditional village of late-Ming dynasty houses, set on the shores of the Jialing River, about 10 kms from downtown Chongqing.

As we approach Ciqikou, and comment excitedly on the many traditional dark wood and white plaster houses we can see, our taxi driver shrugs his shoulders and says: “Still so many old houses, but what can you do?”. 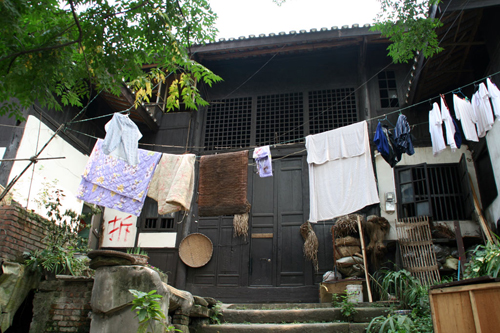 When Adam tells him there are a lot of old houses in London too, he asks incredulously: “Why? Is London not developed then?”
Ciqikou’s main drag promises to be the usual tourist circus (think Pingle, think Luodai), full of souvenir stalls and junk food,

so we quickly dive into the side streets. 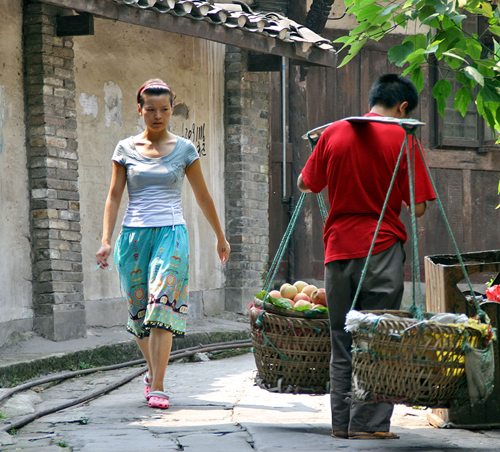 These are still really nice, with plenty of those half-timbered buildings, some housing government offices, a small police station, local stores and small-scale businesses, artists’ workshops, a couple of trendy-looking bars (closed during the day) and plenty of local residents going about their business, sitting in their doorways, chatting to neighbours… 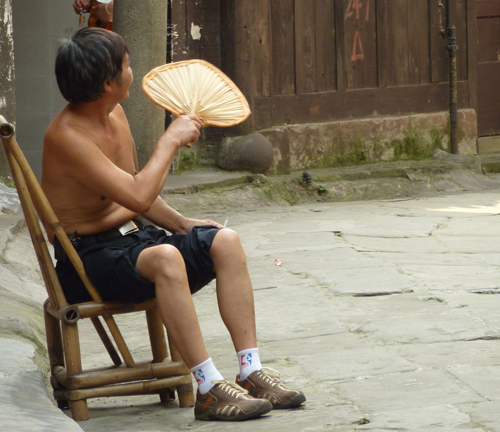 Unfortunately, while exploring the area to the left of the centre, we discover that most of those buildings we have been admiring have been earmarked for demolition, as the red character … demolish…拆 daubed on their white walls indicates. 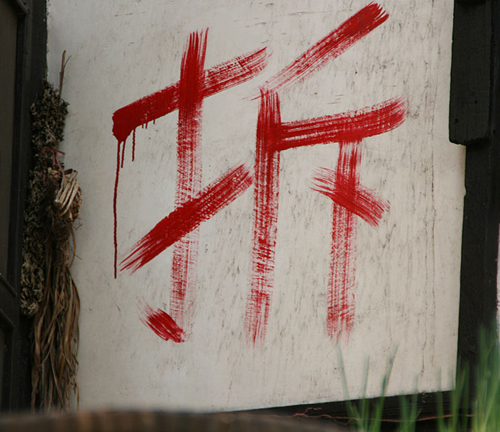 To be demolished (Chai 拆 )

When we ask a local shop keeper, he confirms the imminent demolition and says resignedly that there is nothing the ordinary people can do. However, we also come across several houses decked out in banners and slogans asking: “What kind of development is this?” and demanding justice and proper compensation. 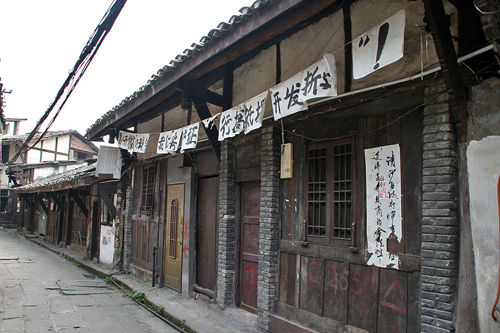 Protesting against demolition in Ciqikou

Luckily, the area to the right of the centre seems to be safe, at least for the time being. Here we discover a couple of delightful old inns and teahouses, close to the river. In one of them we are served a couple of ice-cold beers on the first-floor veranda, where the owners’ family are having lunch. 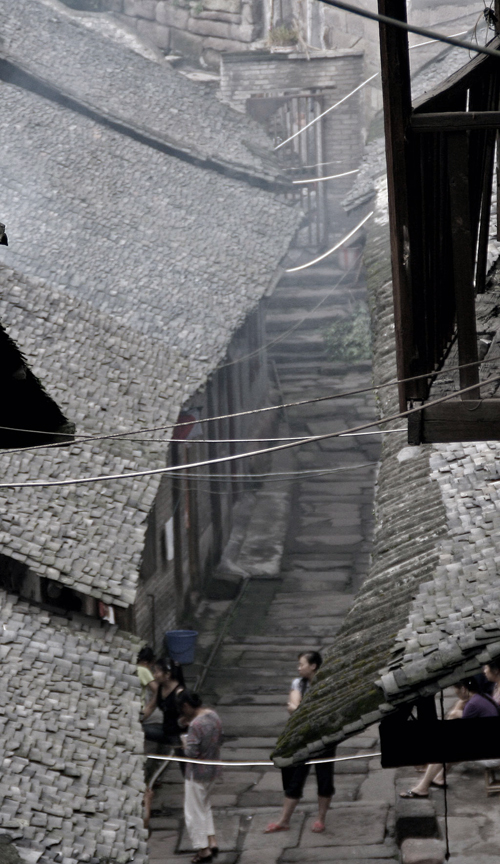 After lunch, for which we do return to the main street, we decide to continue our excursion and visit nearby Gele Mountain. 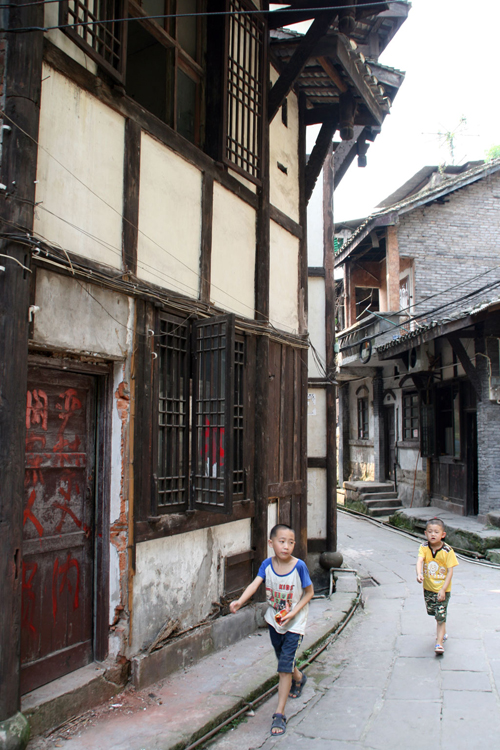 On this mountain, the Kuomintang once held hundreds of Communist civilians captive as political prisoners in its infamous jails; that is all we know about the place and we won’t learn much more during our lightning visit. We have just enough time for a quick look at Zhazi Dong, the largest of the prisons. We walk through the small, dark rooms and stare at the sad photographs, wondering what became of those prisoners. Most of the captions (in Chinese only) feature the year 1949, but was that when they were released, or perhaps executed? The prison reminds us a lot of the Hanoi Hilton, where the French first held Vietnamese, who later held American pilots… 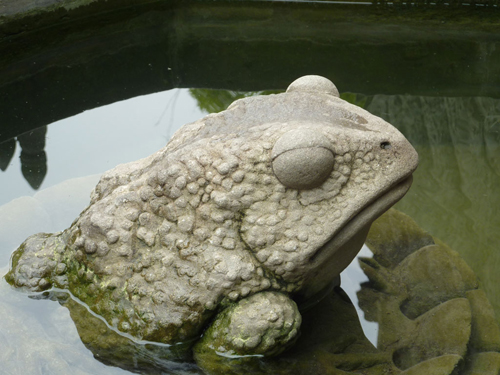 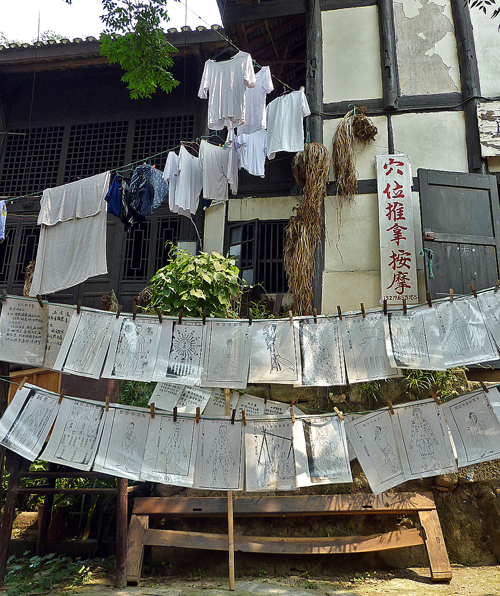 Getting to Ciqikou: you can take bus 503 from Chaotianmen, bus 215 from the Liberation Monument, or simply hop in a taxi. Chongqing traffic is surprisingly smooth (in the direction of Ciqikou) and taxi fares are cheap.

Accommodation and Food: the Lonely Planet recommended Perfect Time Youth Hostel is situated at the end of the main street, overlooking the Jialing River. We also saw a couple of other simple places as we wandered around. As for food, the main street is lined with unpretentious little restaurants, most of them specialising in fish.

Getting to Gele Mountain and back: following the instructions in the Lonely Planet, we got on a bus 808, which was supposed to connect Ciqikou with the mountain. However, when we were told to get off the bus, the mountain still seemed a long way away. We eventually picked up another, smaller bus that dropped us at the entrance. Here we bought a couple of 10 Yuan tickets that included the entry and the bus fare to Zhazi Dong.
If we had had more time, and more information (everything on the mountain is in Chinese only) we could perhaps have explored the mountain a bit better. There is another prison, Baigongguan, as well as a number of scenic spots and it is possible to make your way from site to site, bussing or walking.
To get back, the mini buses that leave from the sites and from the entrance can all drop you off near the main road into central Chongqing. 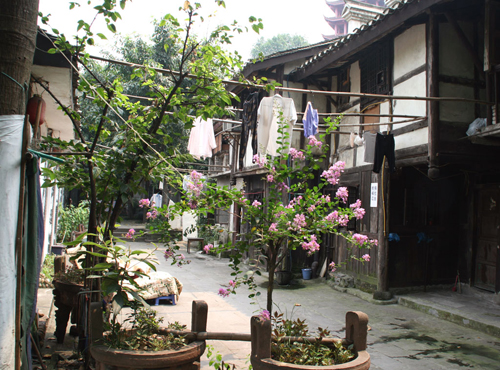