About 20 kilometres to the south of Yushu (玉树) lies the incredibly scenic Leba Gorge. The Leba Gorge is a magnificent valley full of rushing rivers, wild flowers and painted, sacred rocks. Its vast, open grasslands are inhabited by yaks and wild marmots and its changing, threatening skies are crossed by soaring eagles. 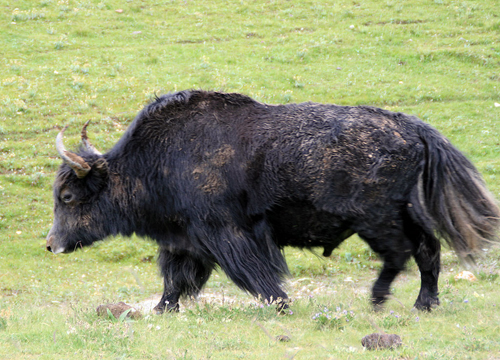 Visitors can access the gorge from a clearly marked entry point near the Yangtze River, drive all the way through and end up at the Princess Wencheng Temple(文成公主庙); which is precisely what we did: 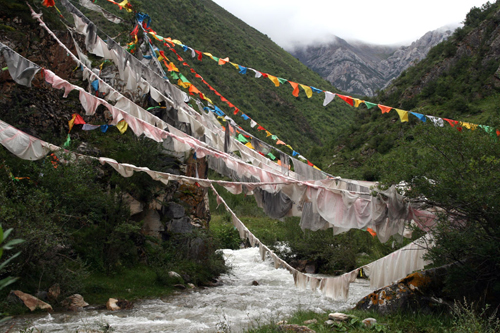 A couple of kilometres down a bumpy track that precariously hugs the mountainside, with the rushing river beside and below us, our car is stopped at what seems to be a makeshift roadblock. Here, a dodgy ticket system is run by some rather shady- looking characters. We are charged 30 Yuan (per car) to enter the Gorge, but they put up the price to 35 Yuan when we demand a ticket!

We have no way of knowing how official this is, as all the negotiations take place in Tibetan and not Chinese. Whatever the case, there didn’t appear to be such a system at the other end. Strangely enough, this was also the only entrance ticket we paid in the entire Yushu area. 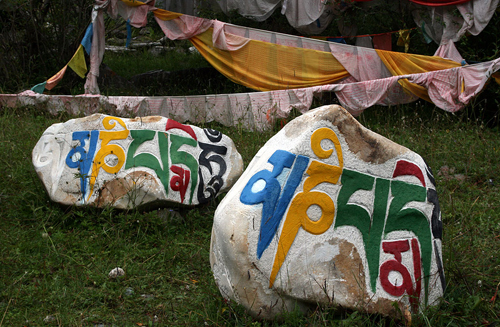 Having paid our entrance fee, we leave the Yangtze(长江) behind and enter the Gorge proper, where we soon come to the first of thousands of colourfully painted rocks and boulders. Most are inscribed with Buddhist prayers in Tibetan script, but there is also the occasional rock carving of a Buddhist deity. The rocks, known as Mani stones(石城), are everywhere: piled up next to the trail, hidden underneath the lush vegetation, high up on the hillsides, near the fast flowing stream that is criss-crossed by fluttering prayer flags… The surprising presence of the Mani stones, which we hadn’t expected, really lends an air of sanctity to this secluded spot. From here the road continues to wind its way through forest for a while, though there are fewer and fewer stones. After that, we start on a steady ascent that eventually leads us onto high moor land. 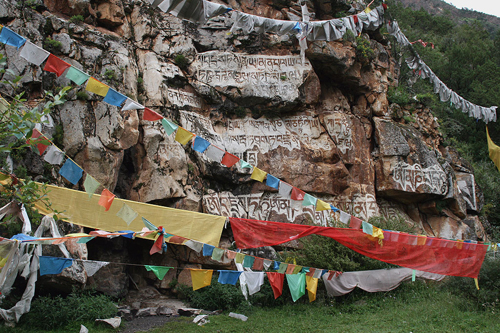 As the land opens out, the scenery becomes starker and wilder, yet somehow more majestic as well. By now, the weather, which had already undergone multiple changes from sunny to cloudy, has taken a definite turn for the worse. We are alternatively driving through drizzle, sleet and mist, all the way up to a wind- blown pass. 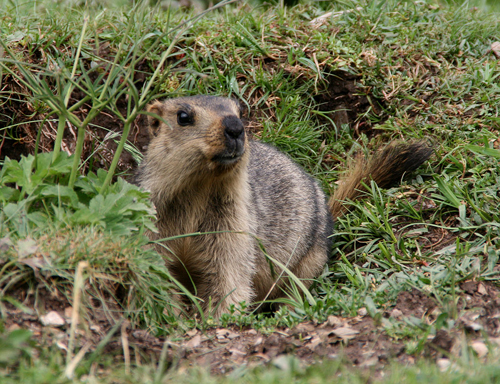 At times, the gorge can seem the loneliest place in the world; but actually you are never alone. Curious yaks and shy marmots, large squirrel- like mammals whose meat has been held responsible for the recent outbreaks of Bubonic and Pneumonic plague (hard to believe of animals as cute as these), look at you and observe your passage from a safe distance. The views from the pass are stunning: wild rugged peaks rise up all around and Tibetan nomad settlements dot the steep valleys, their herds of yaks looking like black specks on the velvety green summer grass.  On the other side of the pass the road descends quickly and before long you reach a cluster of solid looking Tibetan farm houses. Nearby a Tibetan campsite has been set up, with colourfully decorated tents where visitors can rest, eat, drink and make merry during the summer months.

Finally, as you approach the end of the valley, you are greeted by the amazing sight of the Kora (the pilgrims’ trail) above and around the Princess Wencheng Temple, with its kaleidoscope of colours created by thousands of fluttering prayer flags, spread out over the rocks like a giant spider’s web.

Arrival at the Princess Wencheng Temple (see future article) marks the end of the Gorge. Make sure you leave plenty of time for the short, but demanding Kora, as it is literally breathtaking.

The Leba Gorge is difficult, maybe impossible to do by public transport. Hiring a car for the day is probably the best option. There is a monastery minibus from Yushu to the Princess Wencheng Temple at 10am and you could probably hitch back from there, as it is not far from the road that links Yushu to the newly opened airport. However, this would only give you time for a quick exploration of the end part of the gorge, around the Temple. We took a car through the Leba Gorge, as we had very little information about it. We jumped out frequently to do some walking and take in the amazing scenery. If we were to do it again, we’d love to traverse the Gorge on foot, as it must be an incredible experience!

You would need someone to drop you off at one end, preferably near the ticket gate, and pick you up again at the other. Bear in mind though that it would be a tough hike, taking up most of the day. We are not sure of the distances; our driver reckons the whole gorge is only 7 kilometres, but we think it must at least be double. The walking isn’t too difficult, as you can follow the road, but the altitude would make it hard. There are no provisions or facilities along the way, just a few nomads here and there, and the weather is extremely changeable, even at the height of summer. 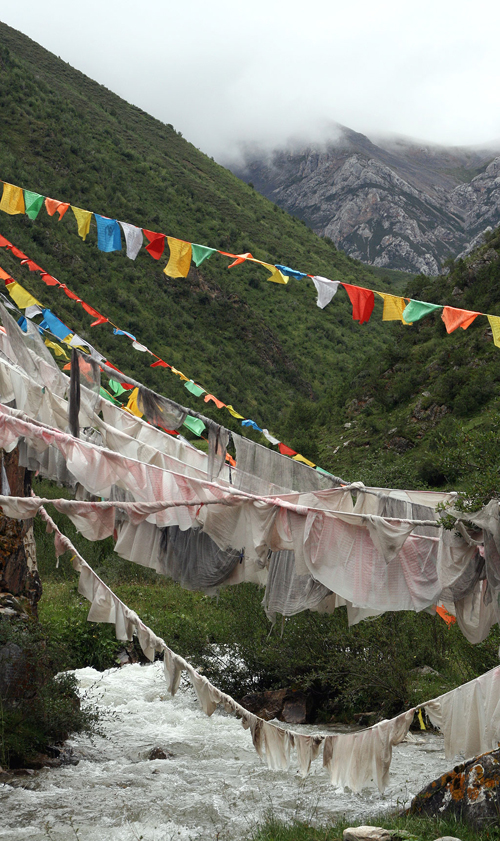 4 thoughts on “The Leba Gorge Yushu”